A Piece of History 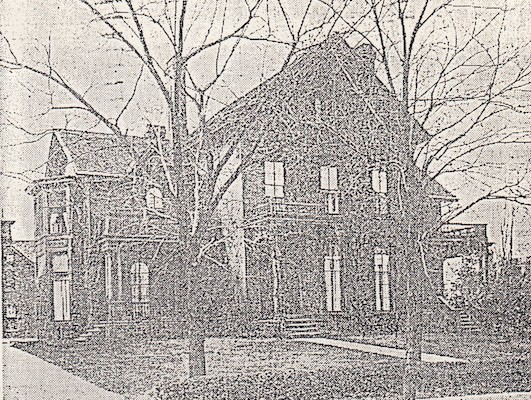 Where Delaware Avenue and West Ferry Street meet, there once stood a historic home. At 1168 Delaware Avenue, where a Canisius High School parking lot and the Montante Academic Wing now stand, was the Milburn House. This home was built in 1861 and was purchased by John G. Milburn in 1888. Milburn was a young, wealthy lawyer who immigrated to Western New York from Newcastle-on-Tyne, England. He went on to become a very prominent social figure in Buffalo and was appointed as president of the Pan-American Exposition Company. This major World’s Fair-type event took place in Buffalo in 1901.

As the president of the Pan-American Exposition, Milburn was given the duty of hosting United States President William McKinley and his wife as they visited this major event. The McKinley’s reportedly felt right at home at the lush, yellow brick home on 1168 Delaware. Unfortunately, tragedy would strike shortly after their arrival as President McKinley was shot by an anarchist. The President would return back to the Milburn House where he received care from his medical crew. Across the street stood press tents with over 250 newsmen covering the tragic event. The largest news event in the world at the time was unfolding at the corner of Delaware and West Ferry in Buffalo.

President McKinley would succumb to his injuries eight days later. The Milburn House turned into a funeral home for the next two days as friends and family visited the President in his casket. Two years after the tragic events, the Milburn family departed for New York City after John Milburn received a partner position at a larger law firm. A fire in 1907 destroyed much of the house, including the room where President McKinley passed away. In 1919, the home was transformed into multiple affordable apartment units.

In 1948, Canisius High School purchased the eight-apartment Milburn House. The home was certainly not what it once was when John Milburn owned it at the turn of the 20th century. The fire and the renovation into a multi-apartment complex left the home in shoddy condition compared to what it once was. The home had become a complicated maze of corridors and hallways and Canisius used it as a residence for Jesuits. Visiting Jesuits often needed a guide so they would not get lost in the house's winding halls. Some have said that the walls were so thin that one could easily force his hand through them. One Jesuit even claimed that he knew of a special brick that would cause the whole house to collapse if it were to be removed. What was once a prominent home had become a dilapidated building.

Canisius demolished the Milburn House in 1957. The school received a generous donation from the Frauenheim brothers which allowed them to construct a new Jesuit residence on campus. This faculty residence, known as Frauenheim Hall,  included a much greater number of living spaces and a chapel. However, this building would also eventually be demolished to make way for the Kennedy Field House. 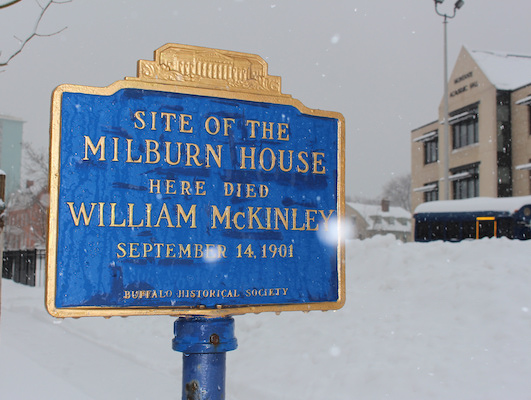 Today, the only thing left marking the site of the former Milburn House is a plaque that sits on the edge of the parking lot. This small blue metal plaque was placed there by the Buffalo Historical Society and notes the death of the President in the former house location on September 14, 1901. 118 years ago, this site marked the tragic end for a United States President and was the center of the news world for a period of time. The parking lot that the Canisius faculty and students depart after every school day carries much more historical significance than what appears to the naked eye.

Share to FacebookShare to TwitterShare to LinkedInShare to PinterestShare to EmailPrint this page
Fr. Naumann on teaching, the Aud, and having students memorize two lines of poetry every night

Fr. Naumann wrote a reflection about his days at Canisius in the Summer 2019 edition of CHS Today.

Fr. Naumann, a longtime English teacher and drama club moderator at Canisius High School who was beloved by generations of CHS alumni, died peacefully Friday night at the age of 92.

The following Canisius students achieved excellence by earning placement on the Honor Roll for the fourth quarter of the 2021-22 school year.

Tuesday’s Senior Awards Ceremony honored scores of members of the Class of 2022, which collectively has earned more than $21 million in college scholarships and grants.

Students attending service academies, earning national honors and school-wide recognition for a wide range of activities and achievements were honored before their parents and schoolmates in the historic Scaccia Auditorium.

The 61st Mr. Canisius was announced by principal Ms. Andrea Tyrpak-Endres during this morning's senior awards.

These are the words of Mr. Canisius 2022 upon being nominated:

"I am beyond thankful for the formative role the entire Canisius community has played in my life. No longer am I the shy, anxious kid that walked through the Blue Doors in 2018 ...

"Our city, our neighbors, our families, we're all hurting. But we cannot surrender our hearts. Your hearts are good, loving and open."

Mr. Canisius finalists with faculty members who made an impact

The six 2022 Mr. Canisius finalists all had their photo taken with a faculty member of their choice on the seniors' fun-filled final day of school.

Peter Reiser ’84, who has 22 years of experience in Jesuit education, including six of those here at Canisius, has been named dean of students at Canisius High School, Principal Andrea Tyrpak-Endres announced Monday morning.

Reiser was the director of college counseling at Canisius from 2000 to 2006. He has spent the last 16 years at Regis Jesuit High School in Aurora, Colorado.

The Mr. Canisius Award is presented annually to the graduating senior who, in the estimation of his peers, epitomizes all that Canisius stands for.

Read the reflections written by the 2022 finalists about their time at Canisius and what it means to be a candidate for this award.

We mourn the loss of Friedman, who was the first female full-time teacher at Canisius High School.

The Buffalo native and Nardin graduate taught at Canisius from 1970 to 1977 and was also the first female lay faculty member at CHS; she helped establish the fine arts program at Canisius.

The following Canisius students achieved excellence by earning placement on the Honor Roll for the third quarter of the 2021-22 school year.

The GAMBIT silent auction is open!

The GAMBIT silent auction is open!

The auction runs through Saturday night, when hundreds will gather at CHS for GAMBIT XLVII.

'All you really need is heart:' Great run for 'Damn Yankees' cast and crew

"You've gotta have heart ... all you really need is heart. ... When the odds are sayin' you'll never win ... that's when the grin should start."

Congratulations to the grinning cast and crew of "Damn Yankees," who seemed to take manager Van Buren's advice after they endured several Covid-related delays and switched musicals in the middle of the rehearsal schedule (!) ... only to respond by putting on a great show for three evenings last week in our historic Scaccia Auditorium.

More than $5,500 was raised in two weeks, marking the drive's highest total in five years. The Lenten Mission Drive, as it has for the last decade, benefitted two fellow Jesuit schools in Micronesia, located in the western Pacific Ocean: Yap Catholic High School and Chuuk Xavier High School.