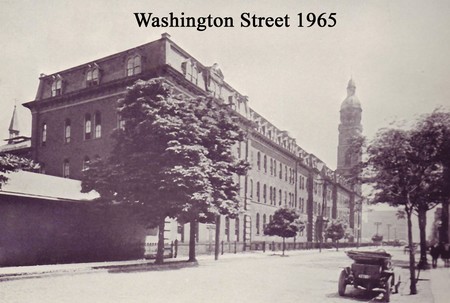 The history of Canisius High School parallels the development of Buffalo, New York, in fascinating ways. Take, for example, its roots in the earliest days of Buffalo’s Catholic past. As early as 1848, the first Bishop of the Buffalo Diocese, the Right Reverend John Timon, C.M., wanted to establish in Buffalo a system of Catholic schools. Having called on the Society of Jesus to help him alleviate a parochial problem at the Church of St. Louis, he had also struck upon the solution to his pedagogical problems.

In September 1870, the Jesuits opened a school adjacent to St. Michael’s Church in downtown Buffalo. In its first year, this combined high school and college dedicated to Blessed Peter Canisius served 35 students, some of them boarders who resided with the Fathers themselves. In 1872, the cornerstone was laid for a new school building on Washington Street, the central portion of which was completed in November of the same year. In 1883, Canisius High School “was incorporated by the State of New York as the Academic Department of Canisius College” (Hennessy 357). In 1908, the boarding portion of the school was closed, and by September 1912, the high school served 379 boys. In December 1912, Canisius College having moved into new buildings at Main and Jefferson Streets in Buffalo, the Washington Street school was turned over to the exclusive use of the high school. In 1919, Father Robert Johnson “became the first rector of the separate high school community” (Hennessy 358). In September 1928, the high school received an independent charter, completing its separation from the college (Hennessy 364). 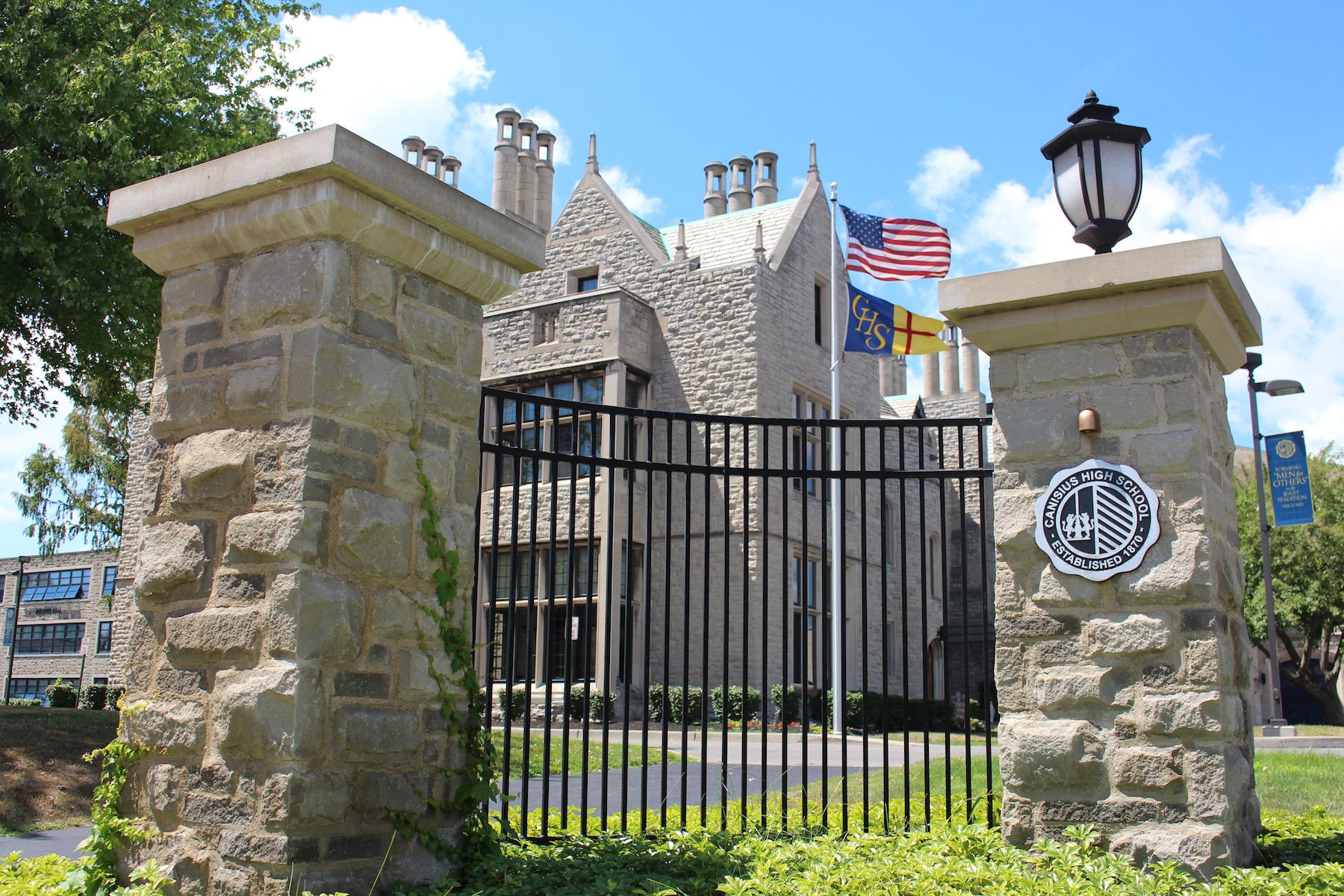 By the early 1940s, the buildings on Washington Street were in considerable disrepair and no longer suitable for the 400-500 boys annually attending Canisius High School. In 1944, the Jesuits purchased the former Masonic Consistory, which in turn had incorporated the former George F. Rand mansion, at 1180 Delaware Avenue. Between 1944 and 1948, the high school classes were split, with the upper school students still attending classes at the Washington Street school and the lower school classes attending the new school on Delaware Avenue.

On August 29, 1948, fully a century after Bishop Timon had expressed his desire to see Catholic education thrive in Buffalo, New York, the Reverend John F. O’Hara, C.S.C., led a solemn procession through the former Consistory and into the new classroom building in order to bless it (Hennessy 352). In September 1948, all students walked through the “big blue doors” at 1180 Delaware for the first academic year in which the school was unified in its new facility. In 1956, a permanent Jesuit residence at the high school was dedicated and named after the two alumni who had generously donated the money to construct the building: George M. Frauenheim '30 and Edward E. Frauenheim, Jr. '32. The Bernard J. Kennedy Field House '49 now stands on this spot.

Since 1948, Canisius High School has grown to an enrollment of over 800 young men. Significant recent additions to the campus include the installation of an artificial turf surface on Tripi Field in 2000, the purchase of 63 acres on Clinton Street for an outdoor athletic facility in 2003, and the acquisition of 1193 Delaware Avenue for office space in 2006, and the purchase of 1140 Delaware in 2017 for fine arts classroom space.

Summer 2007 saw the groundbreaking for and first stage of development of the Canisius High School Athletic Complex on Clinton Street. In the spring of 2008, the construction was complete and Canisius Lacrosse and Track & Field squads began to put the property to use. Now, the Robert J. Stransky Athletic Complex, which has seating for 1,500, and is complete with a top of the line A-Turf field, is home to Canisius football, soccer, lacrosse, and track & field.

The beginning of the 2009-2010 school year saw the completion of the largest expansion to date since the move from Washington Street in 1948. The Montante Academic Hall and Bernard J. Kennedy '49 Field House became the bookends of the Delaware Avenue campus. Montante Academic Hall features state of the art science labs and math classrooms, a computer lab, as well as a makerspace lab for computer science and engineering experimentation with robotics, 3D printing, drones and virtual reality. The Montante Academic Hall also includes an expanded cafeteria. The Kennedy Field House is the home to Crusaders volleyball, basketball, wrestling, and gym classes. It also houses the Brady conference room.

In May 2017, Canisius purchased the Conners mansion at 1140 Delaware Avenue in Buffalo, directly across West Ferry Street from the main Canisius campus' south end. The 13,000 square foot building was originally constructed as a private residence and had recently served as a clubhouse for Gilda’s Club of WNY. The acquisition allowed Canisius to expand its campus and deepen its commitment to the arts as part of the quality Jesuit education offered at the school. Following renovations, the former mansion opened as Canisius’ new center for the fine and performing arts in January 2018. The center includes dedicated rehearsal spaces for music ensembles, individual practice spaces for student-musicians, a recording studio, and architecture, ceramics, sculpture and art classrooms. The first floor serves as gallery space for art exhibits, and as a venue for special events. This expansion is a testament to the continued generosity of our alumni and their devotion to keep Jesuit education in the heart of the city of Buffalo strong for generations to come. Ad Majorem Dei Gloriam!

Hennessy, James, S.J. A History of Canisius High School. Vol. 83. Woodstock Letters: A Record of Current Events and Historical Notes Connected with the Colleges and Missions of the Society of Jesus in North and South America. Woodstock, MD: Woodstock College Press, 1954. 352-365