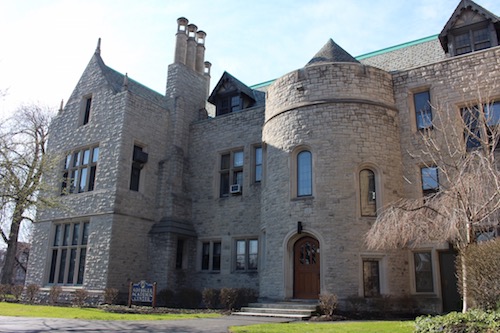 The Koessler Academic Center is the original structure at the heart of the Canisius campus. It was built as the George Rand mansion, designed by William and Franklyn Kidd and constructed between 1918-21. George Rand Sr. was president and chairman of the board of directors of Marine Midland Bank. Unfortunately, both he and his wife died before the mansion was completed. In 1921, George Rand, Jr. moved into the mansion with his brother and two sisters. They only lived in the house for three years before it was sold in 1924 to the Freemasons, who converted it into the Buffalo Consistory. The Koessler Academic Center now houses the visitor's entrance, classrooms, campus ministry, meeting rooms and offices. 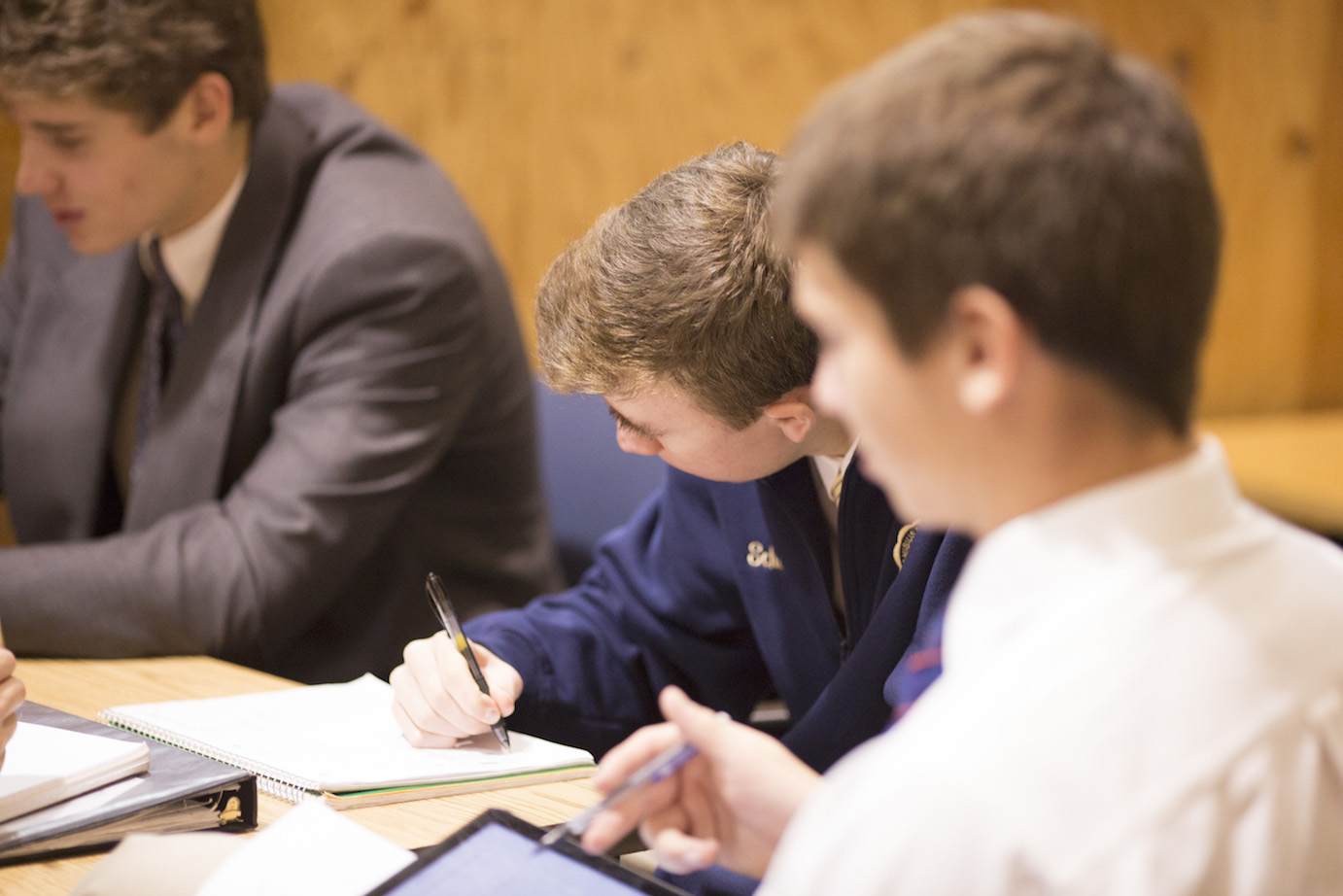 The library at Canisius is a modern learning commons equipped with resources to serve the information needs of the Canisius community.

The library is home to over 7,700 catalogued print volumes including encyclopedias, atlases, current fiction, graphic novels, the classics, textbooks, DVDs, critical guides to literature, biographies, current periodicals and popular magazines, including daily newspapers, The New York Times, The Wall Street Journal, and The Buffalo News. Students also have access to the Internet, email e-Books and electronic databases that can be accessed both on campus and from a remote location using passwords. The library web site has links to a variety of resources that support the curriculum.

A full-time library media specialist is available to help students Monday through Friday, from 7:30 am until 4:00 pm, and qualified teachers cover the room from 4:00 pm until 4:45 during regular school days. The library is for quiet study and students are expected to comport themselves appropriately in the library.

The Canisius auditorium was built in the 1920s when the Freemasons owned the property, before it was Canisius High School. It was an era when elaborate theaters such as Shea’s Buffalo were being built across the country, and the Masons' consistory auditorium was said to be in the same league with the best of them. The lobby (Higgins Hall) features marble staircases and promenades reflecting the simplicity of the Greek architecture preferred by the Masons. the auditorium’s neo-classical style features10 columns of the Corinthian order – five on each side – supporting the cornice (ornamental molding). Approximately 175 feet long by 115 feet wide, the auditorium towers to a height of 50 feet to the sunburst in the ceiling. The rays of the gorgeous sun, made of Tiffany stained glass, extend across the entire ceiling, representing the open sky.

Explore a 360 degree view of Higgins Hall below. 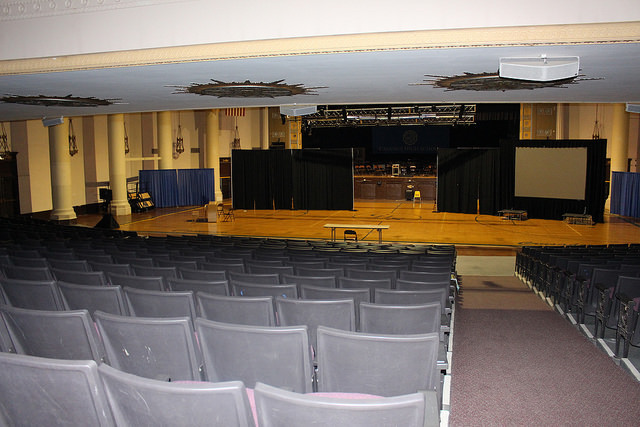 Recessed lighting designed to represent the constellations wowed audiences with an elaborate light show across the dark blue ceiling. In fact, what today appears to be a water stain is actually a representation of the stars of the Milky Way.

For a while, Canisius used the auditorium as a gymnasium with the wooden floor–still evident today–installed over the original orchestra area. These days, Canisius utilizes the auditorium for assemblies, theater productions, graduation, and other special events.

The aud is in need of restoration, in addition to regular maintenance. If you'd like to contribute to these efforts, please contact the Office of Institutional Advancement at advancement@canisiushigh.org. 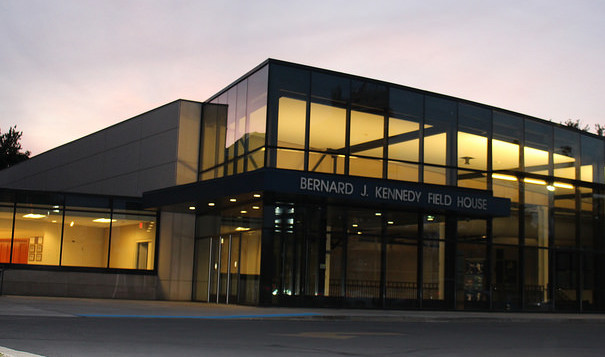 The Bernard J. Kennedy Field House was not only a much-needed facility at the school, but it is certainly one of the most attractive and contemporary buildings one will see driving down Delaware Avenue. During the school day, the wall-to-wall hardwood floor allows the physical education classes the opportunity to run multiple sections of sports to accommodate the Canisius population. It has seating for up to 1,000 people.

The field house is named for a distinguished alumnus, the late Bernard J. Kennedy '49. Kennedy's passion was to help educate young men in the Jesuit tradition, so that they could have some of the same opportunities he was given over 60 years ago. 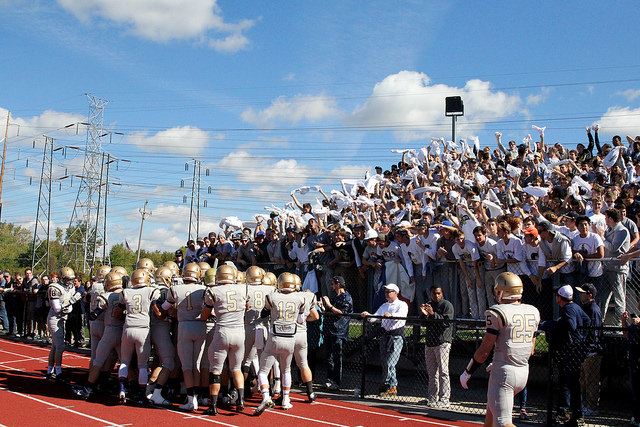 The Robert J. Stransky Memorial Complex is the home of the Canisius football, soccer, lacrosse and track and field teams. Those teams all use Koessler Field, the first component of the complex. Koessler Field has a state-of-the-art synthetic surface for play in all types of weather elements. The field also has an extra layer of padding under its surface to minimize the impact to student-athletes. The track has eight lanes so it is able to host large invitationals.

Through the generosity of a number of donors, a new locker room facility for both the home and visiting teams have been added to the complex. The building has 55 lockers for each team, a training room and an officials' dressing room. 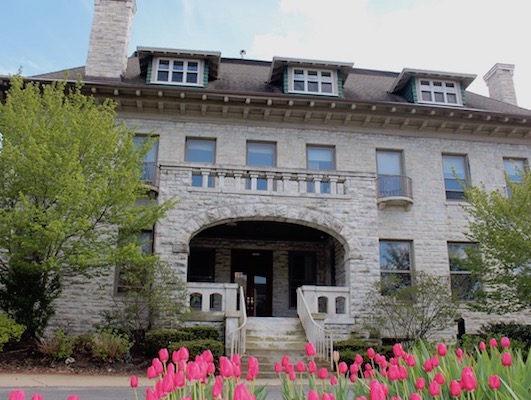 Center for the Arts

Canisius purchased the Conners mansion at 1140 Delaware Avenue in Buffalo in May of 2017 to serve as the school's center for the arts. The property is directly across West Ferry Street from the main Canisius campus. The13,000 square foot building allowed Canisius to expand its campus and deepen its commitment to the arts as part of the quality Jesuit education offered at the school. Following renovations, the center opened in January 2018 with dedicated rehearsal spaces for music ensembles, individual practice spaces for student-musicians, and architecture, ceramics, sculpture and art classrooms. The first floor serves as gallery space for art exhibits, and as a venue for special events.
Click here to see photos of the center for the arts classrooms.

Explore a 360 degree view of the band/ensemble space below.

Explore a 360 degree view of the chorus space below.

Explore a 360 degree view of the chapel below.

Explore a 360 degree view of the weight room below.

See the campus through this video created by Raymond Meng '19.